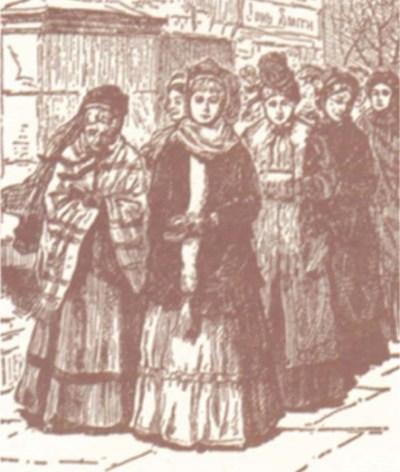 In December 1873, first in Fredonia, New York, followed by Jamestown, New York; Hillsborough, Ohio; and Washington Court House, Ohio, women marched to the saloons where they read Scripture, prayed and sang hymns. This marked the beginning of the Woman’s Crusades. They asked the owners to stop selling alcoholic beverages to their husbands and sons because the money was needed to care for their families.

The women were successful stopping the sale of alcohol for a while. The news of their efforts spread across the country. Within three months, the Crusades had driven liquor out of 250 villages and towns. By the end of the Crusades, more than 900 communities in 31 states and territories experienced its impact. When the establishments began selling again, the women were determined to organize, and as a result, the National Woman’s Christian Temperance Union (USA) formed Nov. 18 to 20, 1874, in Cleveland Ohio.

(For more information, go to www.wctu.org/crusades.html).

Growth beyond the borders of the United States began at the second convention of the National WCTU (USA), held in Cincinnati when Letitia Youmans of Canada came to study the WCTU methods before beginning her magnificent work organizing Canadian women.

In January 1876, “Mother” Stewart was invited to visit Britain, where she spent six months in almost uninterrupted meetings in England, Scotland and Ireland. She was hailed everywhere with great enthusiasm. The British Woman’s Temperance Association was organized on April 21, 1876, at Newcastle-on-Tyne. 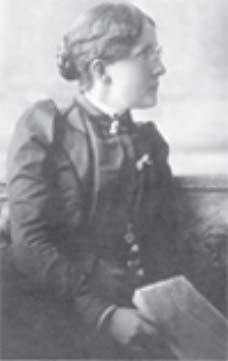 1883, Frances Willard, second national president of the WCTU (USA), visited the opium dens in San Francisco. Later as she looked over the Pacific Ocean, she said, “But for the intervention of the sea, the shores of China and the Far East would be part and parcel of our fair land. We are one world of tempted humanity; the mission of the white ribbon women is to organize the motherhood of the world for peace and purity, the protection and exaltation of its homes. We must sound forth a clear call to our sisters across the seas, and to our brothers none the less.”

In October 1883 at the 10th annual WCTU convention held in Detroit, Willard closed her annual address with this recommendation:

“Finally, dear sisters, let me present to you a plan which is the outgrowth of my special studies in this most eventful year.... I visited the opium dens of San Francisco and was appalled by the degradation resulting from a poison habit that curses the victim more, but his home less, than does the frenzy of the alcohol dream. Meanwhile missionaries to the Orient assured me that since the Crusade a great temperance work is going on in the cities of India, China and Japan, among the English-speaking population, and letters from our Connecticut president, Mrs. Treadwell, now traveling upon the continent of Europe, assure me that leading pastors of Paris are anxious to have a Woman’s Christian Temperance Union organized in that metropolis of the whole world. I knew our British cousins across the line and across the sea would heartily cooperate in the movement, and so resolved to urge my sisters to signalize the epoch we rejoice in by the formation of an International Woman’s Christian Temperance Union that shall elt the globe and join East and West in an organized attack upon the poison habits of both hemispheres. We can do no more at this convention than to authorize the initial steps of such a movement. For a year or two the work must be wholly carried on by correspondence and through the press. Few have as yet the international spirit.... I suggest little more today than that the prestige of our great society be the fulcrum for a preliminary lift in this splendid enterprise.”

Soon after, Frances Willard wrote the Polyglot Petition, the first world-wide request made to world leaders to take a stand against the alcohol traffic and opium trade. The Petition was circulated by Mary Clement Leavitt who accepted the challenge to be the first round-the-world WWCTU missionary. She began with a visit to the Sandwich Islands, Hawaii and went on to Australia, India, China and Japan. She carried the Polyglot Petition and organized WCTUs. In seven years of travel Leavitt logged 97,308 miles, formed 6,623 Local Unions (WCTUs), and talked in 47 languages through 228 interpreters. Over 7,500,000 men and women from 50 countries, and in 49 languages, signed the Polyglot Petition. 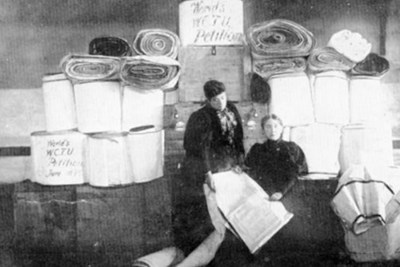 Pictured on the left is Lady Henry Somerset of England with Frances Willard and the Petition.

This mammoth petition made its first public appearance at the first convention of the World’s WCTU in Boston in 1891. It was festooned about the entire hall and large rolls of it stood upon the platform. At the second WWCTU Convention, held in Chicago in 1893, the petition had a place of honor, and a section was taken across the Atlantic ocean for the third convention in London, in 1895. In Toronto, in 1897, it was also a prominent feature of the decorations. However, the immense cost of transportation made it impossible to continue taking it to conventions, but in Boston, October 17-21, 1906, a section of the famous petition was again on exhibition.

Devoted women followed in Leavitt’s footsteps. Jessie Ackermann, the second round-the-worldmissionary, received her appointment at the 1888 convention, held in New York City. She worked chiefly in Australia, although visiting many other countries of the Orient. Dr. Kate Bushnell and Elizabeth Wheeler Andrew received their appointment in 1890 and worked chiefly in India, where they did magnificent service in the line of social purity. Alice R. Palmer, appointed in 1891, went immediately to South Africa, where she worked for two years.

Margaret Bright Lucas of England was appointed the first World WCTU President in 1884, but died in 1890. At the first World Convention that was held November 11, 1891 in Boston, Massachusetts (USA) Frances Willard was elected to serve as the Second World WCTU President. Fourteen countries were represented: Great Britain by eight delegates; Canada by seven, Hawaiian Islands, Japan and Cape Colony, two each; Siam, Burma, India, France, Newfoundland, Spain, Italy, Syria and Ceylon, one each. The number of delegates from the United States is not reported.

While only 13 affiliated countries were represented by delegates at the second WWCTU convention in Chicago in 1893, forty were reported by the secretary. The same General Officers were reelected, reports were given from five white ribbon missionaries, and some slight changes were made in the constitution, the most important being the change in the affiliation fee from one-half cent to one cent per member. The third convention was held in London, England, in 1895. Twenty-two countries were represented by delegates. The fourth convention in 1897 was held in Toronto, Canada with 22 countries represented. The WWCTU constitution was amended to include the words “without distinction of race or color.” The fifth convention was held in 1900 in Edinburgh, Scotland where 35 counties made reports of work accomplished. The WWCTU was well on its way.

At the sixth convention in Geneva, in 1903, the title of the foreign workers was changed to “World’s White Ribbon Missionaries,” and, at that same convention, nine were appointed: J. K. Barney, Addie Northam Fields, and Kara Smart, USA; Harrison Lee and Cummins and Vincent, Australia; Ethel Beedham and Christine Tinling, England; and Olafia Johannsdottir, Iceland.

The WWCTU has proposed, supported and helped establish:
- protection of women and children at home and at work
- women’s right to vote for world peace

The WWCTU has opposed and worked against:
- the use of alcohol, tobacco, and other drugs
- the drug traffic
- human trafficking
- violence against women
- child labor

The WWCTU was a founding member of the International Council of Women in 1893. The WWCTU is a charter member (1945) of the United Nations Non-Governmental Organizations. For more than 125 years, the WCTU has trained women to think on their feet, speak in public, and run an organization.

Timeline of Past Presidents 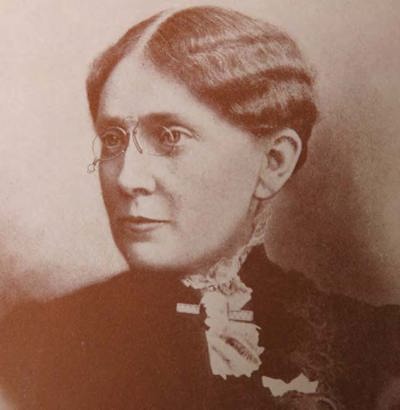 Frances E Willard is considered to be the mother of the WCTU (Woman’s Christian Temperance Union). She was the World WCTU President from 1891-1898 and led with passion. Some words describe her as - clear, determined, enthusiastic, firm, generous, honest, innovative, outspoken, peaceable, progressive, spiritual, sure, tender, unique, optimistic and well dressed. She was a charismatic leader. She believed the WCTU was ‘a high and holy calling.’

Frances grew up in North America in a Christian family. As a teenager she, with her family, signed a pledge to abstain (keep away from) all alcohol and always drink ‘cold water from the well or spring.’ She became a teacher and taught in many schools. She wanted to see more of the world and she had an enquiring mind. For nearly two years she and a companion travelled to many countries and studied at various institutes. When she returned she became the first President of the brand new Evanston College for Ladies. She spoke to 1,000s of people about things that mattered to women, to families and the world.

Eventually she resigned from her teaching profession and gradually became involved with the growing Temperance movement. She was convicted that this was the place God wanted her to be. She became the leader and president of the WCTU in Chicago city (1874), Illinois State (1878), America National (1879), then World President in 1891. Along with the active temperance work, she campaigned for women’s right to vote. ‘The WCTU became the most broadly comprehensive organisation the world had ever known.’ (Sarah F Ward)

Frances Willard was a magnetic personality and a brilliant speaker, not requiring written notes. She read, studied, prayed and delivered powerful speeches to thousands of people in Europe and America. Her influence spread throughout the world. ‘From her thousands of women learned what to pray for, organise and work for, talk, write and publicly speak for. She inspired a world of women.’ (Carrie Chapman Catt)

The National Council of Women was organised by Frances Willard, along with some other prominent women, in 1888. She was elected as the first president. This council saw the need for a ‘clearing house’ for women’s activities in America and in other nations around the world. They also saw it as an opportunity to enhance and spread the work of the WCTU to other women’s groups. Indeed the temperance message belonged to every woman for the sake of her family. Frances Willard maintained that the home and family were of topmost importance.

She met with many important people - Presidents, Queen Victoria, the Pope, the Kaiser, Sultan of Turkey and other world notables. She leaned to ride a bicycle at 53, she set up a gym for women. She was always at the front of new ideas and technology and urged her helpers to keep up with telegraph, typewriter and telephone. (She is our example)

When she died on February 17, 1898, 30,000 people came to honour her at Chicago and Evanston (her home town) where the flags were at half mast. Thousands attended her funeral. She has been honoured and remembered in many ways throughout the United States of America and around the world. There are statues, plaques, pictures, fountains, schools, parks, stained glass windows, a train carriage and a postage stamp in honour of Frances Willard. Children bore her name. She is not forgotten and never will be.

We think that the very best way to make a woman of you is that you should begin just where you are to work for the Cause.